Let us manage the data, so you can manage the money.
You are here: Home / Tech Help / Buying a computer to run PortfolioCenter 2: Disk speed 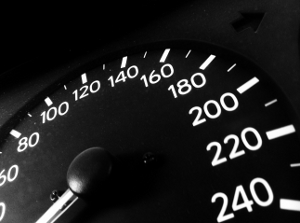 The next version of PortfolioCenter – expected Fall 2012 – will require Windows Vista, 7, or Server 2008.  If you need to buy a new computer to continue running PortfolioCenter, remember the larger your PortfolioCenter database, the greater its demand on disk performance.

Disk performance is determined by the hardware you purchase.  Slow disk performance has a negative effect on almost every Windows task.  Although disk performance can be enhanced later, it is not a trivial task — so purchase the highest-performing disk subsystem you can afford.

When you go shopping, review 4 of the less-common specifications which describe the speed of the disk:

Speed (RPM): The rotational speed of the disk has a bearing on how quickly a large amount of data can be accessed.  Higher RPM is better.  Most desktops have 7200RPM disks; stay away from anything slower.

Connection interface:  SATA is common and inexpensive, but SAS is usually the better performer.  Since SAS disks can be found with higher rotational speeds, choosing a 15000RPM SAS disk instead of a 7200RPM SATA disk can significantly increase the disk subsystem performance.  SAS disks are usually available in servers and high-end PCs.

Single disk vs. array (RAID): A single disk has one connection to the system, but each disk in a RAID has its own connection.  Although the increase isn’t linear, more connections means more data can flow at the same time, improving disk performance.  RAID is usually found in servers and high-end PCs.

Solid State Drive (SSD): Although they are treated like disks, these devices have no moving parts.  They contain large amounts of memory that don’t lose data when powered off.  Although they are usually wired with a SATA interface, SSDs can transfer data much more quickly than a conventional disk (although still far slower than RAM).  SSDs are expensive but available on all kinds of PCs and laptops.

Have you seen this error (or one like it) when using PortfolioCenter? I got this error when trying to use the Trade Lot Reconciliation Tool after … END_OF_DOCUMENT_TOKEN_TO_BE_REPLACED